Here's a small snapshot of Archaeology in Israel. Interactivity is a big feature of Israeli archaeology; good signage, models, reconstruction, reenactments and even participation at an ongoing dig. While the valuable artefacts are displayed in various museums a lot of the emphasis is on experiencing the actual sites. 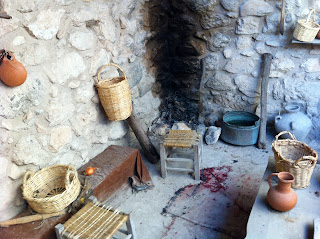 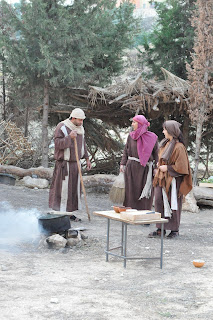 Two photos from the the Nazareth re-enactment village. Not entirely perfect, notice the steel legs of the modern table but the site put you in the mood in a way visiting a church or a stone wall didn't. 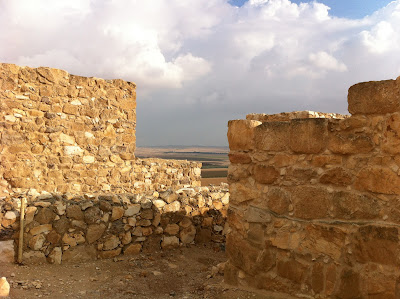 One of the best features of Israeli Archaeology, was the way they marked the line of reconstruction.  So on the left hand-side a raised line runs through the lower third of the wall, everything above it is reconstruction, everything below is in-situ, as it was found. (Tel Megiddo) 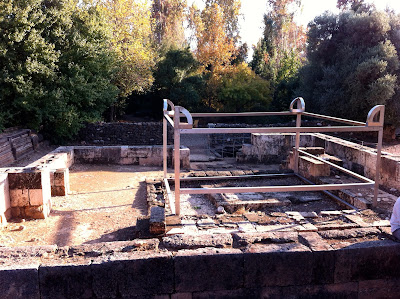 This metal sculpture represents where the edges of the altar at Tel Dan may have been. 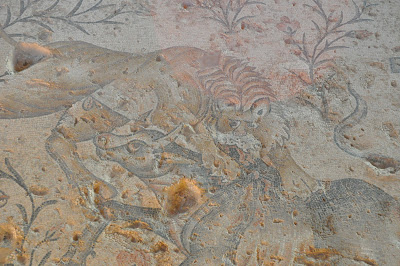 Mosaics form a beautiful remnant of the Roman and Byzantine periods. (Zippori) 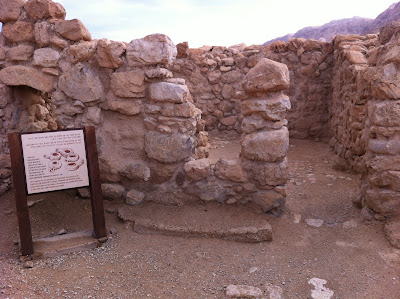 This is Qumram, the Essene settlement near where they found the Dead Sea Scrolls and possible temporary home of John the Baptist. (Mostly reconstructed.) 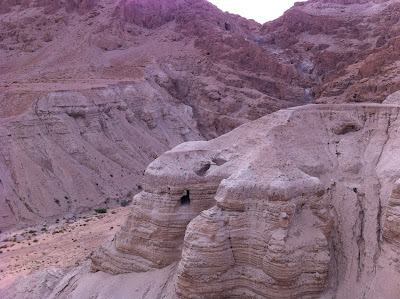 One of the caves where they found some of the Dead Sea Scrolls. 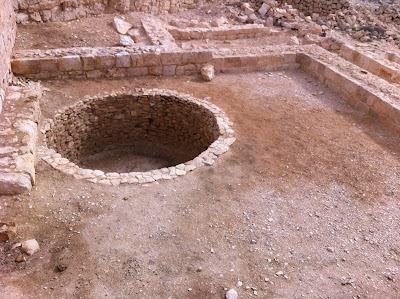 A large wine press, preserved intact because of it's remote desert location at Tel Avedat. (Generally the exposed stone was looted to build other buildings.) 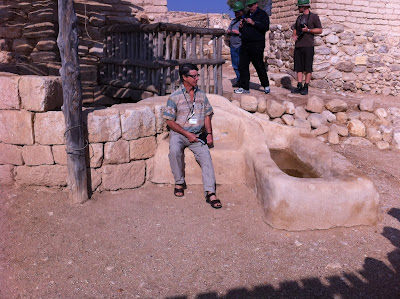 The well at Tel-Be'er Sheva partially reconstructed so you can see how animals would have drunk from it. (That's our guide sitting on the step with members of our tour group in the background.) 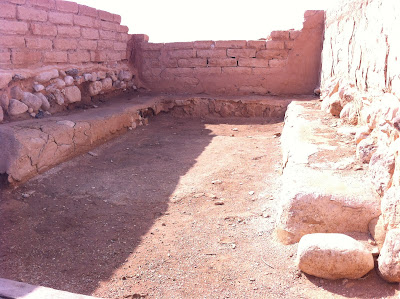 The chambers of the gate, where the King and his officials made their judgments. (Tel-Be'er Sheva) 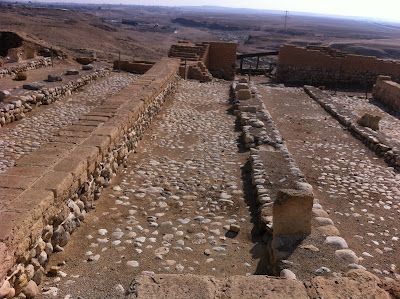 The store houses, long and narrow for ventilation and access, newer materials come in the far side. (Tel-Be'er Sheva) 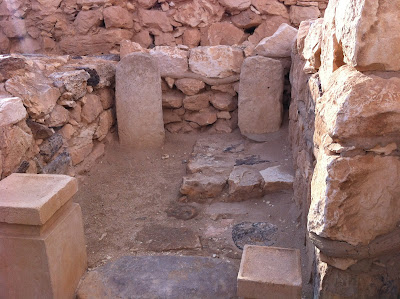 The very interesting remains of a duplicate, mini-temple in the Negev at Tel Arad. This is the site's Holy of Holies, but notice the two stones at the rear of the room: the two pillars of the law or Yahweh and his consort? 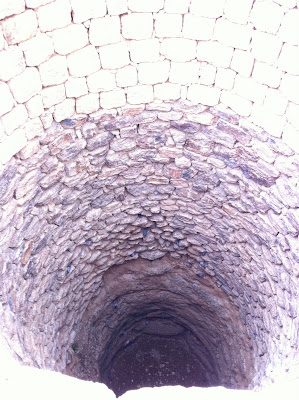 A little hard to see, but four civilisations have used this well at Tel Arad. 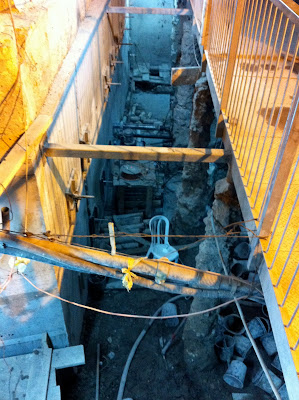 Many sites are a work in progress, this the part of the Wester Wall Tunnel.

A display (at the beginning of the Western Wall Tunnel) showing how Mount Moriah become the Temple Mount. 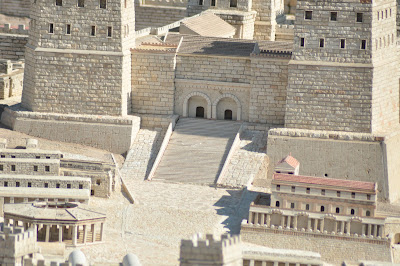 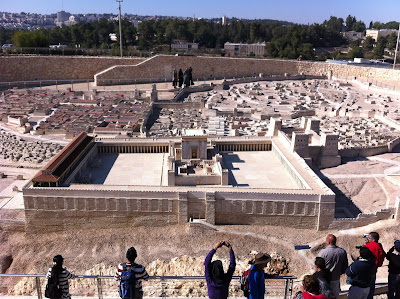 This is a massive model of 1st Century Jerusalem at the Israel Museum. 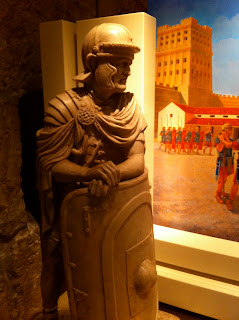 Everything was signposted and wherever possible with pictures, usually in a style that some how reflected the mood of the site. 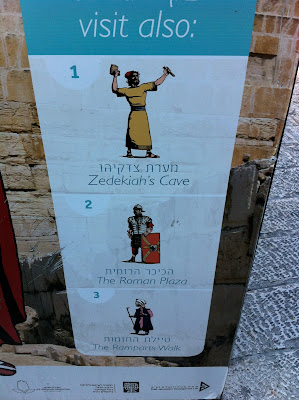 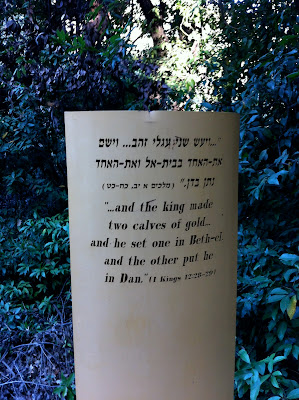 It was unusual at first to see Bible verses as a natural part of the signage. (Tel Dan) 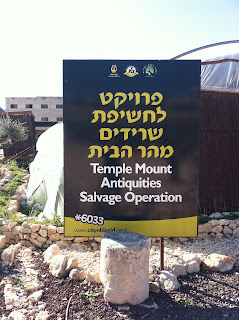 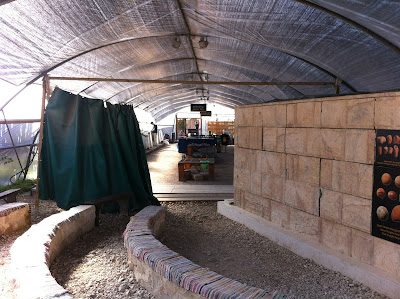 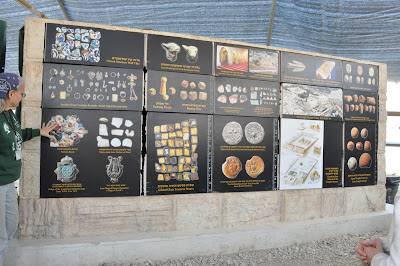 The Muslim authorities in charge of the Al-Aqsa Mosque excavated an underground section of their mosque ("Solomon's Stables") without an Archaeological survey and then dumped the debris in a nearby valley. The dig is basically a sifting through the tons of rubble left in the valley, you pay a small fee, get a quick seminar and then help the Archaeologists sift through the dirt and rocks.