Tim Challies' recently produced this chart of the Ordo Salutis, which is somewhat useful because it reminds the viewer that salvation has a linear pattern but not so useful in communicating the relationships between the different doctrines. For example, Regeneration is a through-theme that intersects several other doctrines. Another example where the chart doesn't communicate the shape of the doctrine is Adoption, which when you look at the biblical evidence isn't a distinct stage between Justification and Sanctification, as the chart below suggests. It's also interesting to see which doctrines got chopped. Union with Christ, Faith, Redemption, Reconciliation and Mortification all seem like important aspects of salvation that don't get mentioned. 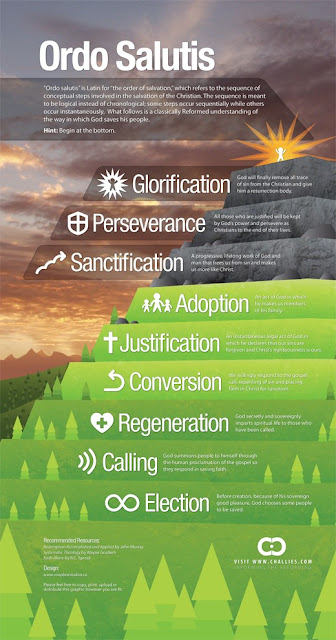 I've been and continue to be a longstanding fan of Challies' blog but I think this chart (or a causal google search) shows a lack of thinking visually, coherently and comprehensively about the Doctrines of Grace. Charts like this are useful in conveying a general sense of how Salvation works but we need a diagram that represents the relationships between the various doctrines in a way the traditional numerical list failed to do.
Email ThisBlogThis!Share to TwitterShare to FacebookShare to Pinterest
Labels: Ordo Salutis, Visual theology
Newer Post Older Post Home