A friend and I are making 2012 a year of CS Lewis, we've just finished Voyage to Venus. In a serendipitous moment I read the beginning of the Green Lady's temptation by the demonic Weston in Perelandra (aka Voyage to Venus) the night before Campbell Markham preached on Romans 5:12-21 at SOUL Church.  At the beginning of the service I read this from Genesis 3:4-7
"You will not surely die," the serpent said to the woman. For God knows that when you eat of it your eyes will be opened, and you will be like God, knowing good and evil." When the woman saw that the fruit of the tree was good for food and pleasing to the eye, and also desirable for gaining wisdom, she too some and ate it. She also gave some to her husband, who was with her, and he ate it. Then the eyes of both of them were opened, and they realised they were naked; so they sewed fig leaves together and made coverings for themselves.

Ransom the hero of an earlier, quite different, trip to Mars, is locked in a struggle with Weston who like Satan in the garden of Eden is tempting the Green Lady (The Eve-like first woman of Venus) to break a command (not to live on the fixed land) of Maleldil (the interplanetary name for God).  In Weston's temptation Lewis captures the twists of truth and falsehood that grimly echo Satan's lies to Eve.


"But Ransom and I have already made you older about certain matters which the King [the Adam-like first man of Venus] never mentioned to you. That is the new good which you never expected. You thought you would always learn all things from the King; but now Maleldil has sent you other men whom it had never entered your mind to think of and they have told you things the King himself could not know." ... [The lady replies] "Maleldil would not make a thing like that happen. It would be like a fruit with no taste." "But it would have a taste for him. Do you not think the King must sometimes be tired of being older? Would he not love you more if you were wiser than he?"

Weston argues that it would be courageous of the Lady to disobey Maleldil, it would be a noble sacrificial act for her children and her King. Prehaps even this was the path that Maleldil intended all along. The end, would justify the means! Weston even says in a chilling moment:


"Not yet, there is more. He [Ransom] has not told you that it was this breaking of the commandment which brought Maleldil to our world and because of which He was made man. He dare not deny it." [to which after a dreadful pause Ransom says] "I will tell you what I say," answered Ransom, jumping to his feet. "Of course good came of it. Is Maleldil a beast that we can stop His path, or a leaf that we can twist His shape? Whatever you do, He will make good of it. But not the good He had prepared for you if you obeyed HIm. That is lost forever. The first King and first Mother of our world did the forbidden thing; and He brought good of it in the end. But what they did was not good; and what they lost we have not seen. And there were some to whom no good came nor ever will come." 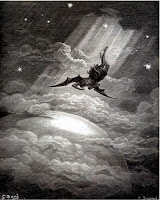 Along with writing Perelandra and the Narnian stories, Lewis was a scholar of late-Medival English Literature, famously writing an introduction to Paradise Lost an epic poem by John Milton. In it Satan comes up from his imprisonment to turn man against God because he:

Provokes my envy, this new favourite
Of heaven, this man of clay,

So he enters the garden searches for the first people and finds Eve alone and says this to her:


Opened and cleared, and ye shall be as gods,
Knowing both good and evil as they know.
...
So ye shall die perhaps, by putting off
Human, to put on gods, death to be wished,
Though threatened, which no worse than this can bring.
And what are gods that man may not become
As they, participating godlike food? (IX:708-717)

What's fascinating about Milton and Lewis' accounts is the way they show Satan making evil somehow necessary, somehow part of something that God would really want anyway. I think it's also important to consider doctrine imaginatively and Perelandra (along with That Hideous Strength its sequel) does this magnificently.
Email ThisBlogThis!Share to TwitterShare to FacebookShare to Pinterest
Labels: CS Lewis, Original Sin, Romans
Newer Post Older Post Home