Dark Knight is a philosophical-horror film directed and produced by Christopher Nolan, and is part of a Batman mini-series. I'd say that the joker, chillingly played by Heath Ledger, is one of the most horrifying villains in cinematic history. However it's also very interesting to see how the other characters respond and deal with the Joker and his swathe of destruction. Overall you could say Dark Knight is a modern philosophical thought experiment. The film is enthralling not because Nihilism is attractive but because truth is mesmerising, Dark Knight brilliantly and accurately expresses a number of world-views and how we respond to them.

Batman (& Bruce Wayne), Gotham police lieutenant James Gordon, district attorney Harvey Dent and the Mayor form an unofficial coalition to "clean up the streets" and break Gotham's Mafia gangs. It involves convicting them on the basis of their money laundering. Into this story plunges the Joker like a perverted deus ex machina.  A wounded mob underling asks the Joker; "Criminals in this town used to believe in things, honour respect, look at you what do you believe in?" To which he responds: "I believe what doesn't kill you simply makes you stranger." Batman can't stop the Joker's violent antics and in the end the Joker puts him into an impossible bind; the 'noble' district attorney or the girl (Rachel Dawes). As Gordon says at the end of the movie, Gotham needs a hero, who is not just stronger than the Joker, but more noble.

How do you fight a nihilistic villain? 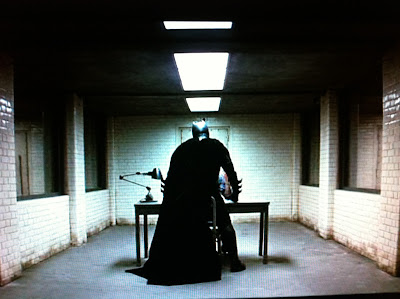 The Joker is held by the Police and threatened with violence (but not death through torture, Batman's one rule) by Batman.  Usually in this scenario, the antagonist desires to live or values something the protagonist can threaten.
Batman: "I have one rule."

The Joker: "Then you'll have to break that rule, because the only sensible way to live in this world is without rules."
Batman: "Where are they [Dent & Rachel]?"

The Joker (laughing): "You have nothing, nothing to threaten me with."
Nihilism cannot be defeated without supernatural intervention.  Batman isn't a Superman, he's Bruce Wayne with lots of money and martial arts training. He represents the best Western Culture has to fight evil but against the Joker, he is powerless.

If we are just the product of chance, then the Joker is our hero! 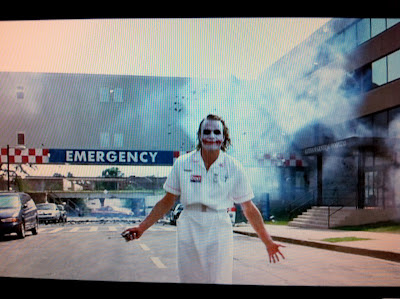 One of the core assumptions of secular naturalism, is that the observable world is, in the final measure of things, a product of chance. We are the product of random mutations and the world around us has only the appearance of order. Philosophically the Joker is the moral expression of this idea. "See" he says to Batman, "I'm not a monster, I'm just ahead of the curve." Later he describes himself as an "agent of chaos". 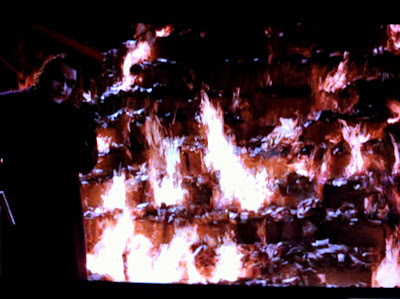 The Dark Knight is successful because it's generally authentic.  It realistically portrays several world-views, for example the desperate and superficial governance of the ruling elite (thing of the Wayne's coktail party) or the dark freedom of Nihilism. For example the scenes where the Joker burns the money and turns the gun on himself as he taunts Harvey Dent on his hospital bed.

Justice demands a hero, should he be just? 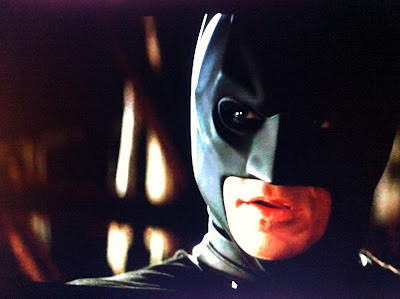 Batman's "rule" is to not kill the joker, you could also extend it to those not directly involved in the fray. Does this make him just? Wayne is criticised for his 'all seeing eye machine', as an unjust measure for a hero to use despite it's original purpose in tracking down the Joker. In the hollow conclusion, Harvey Dent is held up to be the hero fit for public consumption because even a fake hero needed to be perceived as righteous.

Are villains and heroes really just the same? 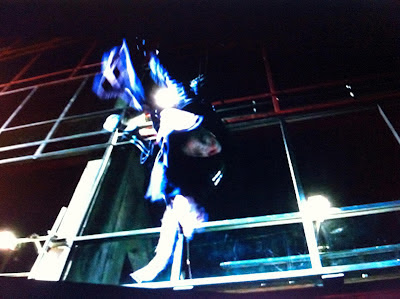 Joker: "I don't want to kill you, what would I do without you? .. No, you complete me!" At one point as the Joker and Batman fight on the edge of a high-rise construction site, the Joker is caught upside down by a rope looped around his ankle but the camera slowly turns as he speaks until he's facing the audience right way up. 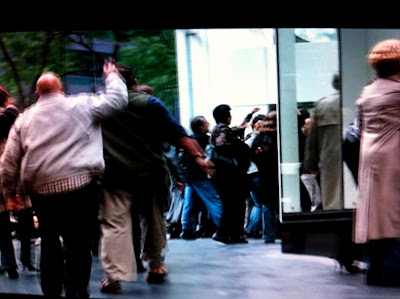 The Bible describes people like sheep, lead by a shepherd. However the Joker comments that "when the chips are down these civilised people, they'll eat each other." The innocent crowds Batman works to protect are turned in an hour by the Joker into people that'll do anything to preserve themselves and their nearest and dearest. 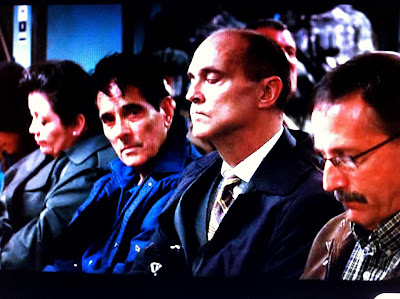 Nolan in an enigmatic twist has us the audience caught in an "aw shucks, triumph of the human spirit moment" when the people on both boats (civilians in one and criminals in the other) turn out to be nice folk and don't detonate each other's explosives. It's almost as though Nolan's throwing in a humanist world as either sop for our consciences or as an ironic nod to political correctness.

The Joker as the 'Prince of this world' 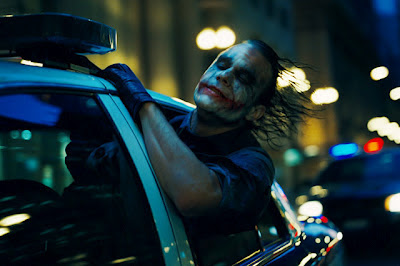 In many ways the Joker is the Prince of the world, that old liar the Serpent. (A theme of the film is the Joker's false stories about his facial scars.) Like CS Lewis' diabolical Westron from Voyage to Venus, he offers death and destruction as a legitimate path to freedom. He doesn't dress up his diabolical schemes with silly demands for money or a Kingdom. When Satan tempts Jesus, he isn't seeking the throne of heaven per say, it's beyond his grasp forever, instead he wishes to tear the Son down to his own dark despairing level.

The Dark Knight is a tragedy 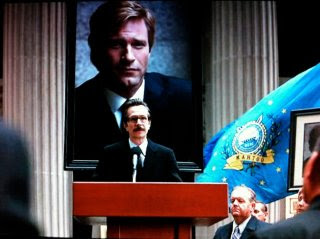 Hollywood generally leaves tragedy as a genre to the non-mainstream cinema. However Dark Knight finishes as a tragedy, the villain, while thwarted, remains undefeated just moved off-screen, the one noble character Gordon is left humiliated before his family and lying to the public about Batman as the hero himself runs into the darkness unthanked and hunted.