The secular myth of "neutrality" 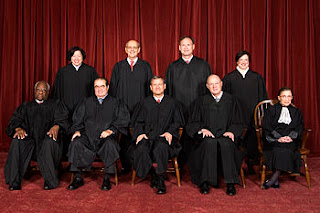 The New York Times reported this week that the results of a recent poll indicate Americans think their Supreme Court Justices are biased, in other words they make legal rulings on the basis of ideology.


"Just 44 percent of Americans approve of the job the Supreme Court is doing and three-quarters say the justices’ decisions are sometimes influenced by their personal or political views, according to a poll conducted by The New York Times and CBS News."

Of course the judges are ideological, what I don't understand is the importance of 'neutrality' in the secular mythology. Clearly everyone operates within the parameters of their preconceptions, so why this continued deception, this continued myth of neutrality? It's possible for judges to be fair, honest and accurate, but to say they are morally or culturally neutral is either self-decived or rhetorically manipulative.
Email ThisBlogThis!Share to TwitterShare to FacebookShare to Pinterest
Labels: Philosophy, popular Culture
Newer Post Older Post Home