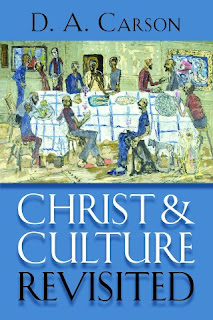 What's the relationship between the gospel and culture? Carson doesn't really answer this question in Christ and Culture Revisited, but suggets some starting points for thinking about the topic. The book is really an extended critique of Niebuhr's classic: Christ and Culture.  Richard Niebuhr, an interesting American theologian from the first half of the twentieth century outlines five approaches and favours the fifth.


Essentially Carson is arguing that Nieburhr's paradigm is a distortion because it overemphasises certain biblical passages over others and isn't practical for all Christians in all contexts. While Carson might be a brillant scholar and theologically reliable, Christ and Culture Revisited is full of long dreary tangents. Most helpfully he challenged the idea that secularism is neutral and reminded me that the relationship between gospel and culture should be coherent in both Hobart and North Korea.

Reflecting on the book, I think that the best paradigm is that "the Gospel challenges culture." This phrase strikes the right balance between the common grace of creation and the special grace of the gospel. Humans create culture but it's marred by sin.


I also think Christians fall into three traps when thinking about the interaction between Gospel and Culture, they might assume that the interaction is unimportant, optional or neutral.
Email ThisBlogThis!Share to TwitterShare to FacebookShare to Pinterest
Labels: Gospel, popular Culture
Newer Post Older Post Home