The Separation of Church and State? 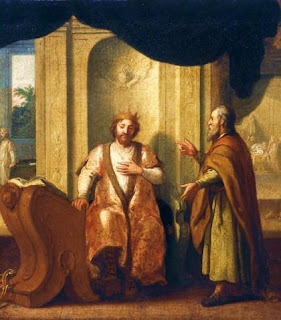 Deuteronomy 17-18 describes the roles of Kings, Priests and Prophets. (Judges are mentioned in chapter 16 but I guess without the temporal power of the King their authority would be limited.) Although they're all described together in a cluster and apart from the command for a priest to remind the King of the law (17:18-19), they're just plonked down next to each other. I think what we're seeing here is colliding spheres of authority, an uneasy coexistence rather than the estranged relationship described by the phrase "separation of church and state"  The slogan is meant to protect law-abiding citizens from nefarious bishops and keep innocent congregations safe from meddling politicians. The problem however is that neither the church or the state are neutral or limited to their own narrow spheres. Historically these three spheres have always existed and will do so until the end of humanity on this side of eternity, so it's better to consider their relationship and ideological nature then become spiritual hobbits focused on our own little pietistic patch or moral campaigners forever reacting to some new crisis. What I'm suggesting is not method for interacting with film or responding to abortion but a paradigm for understanding how those two things fit in the larger scheme of things.