How much of science (or reality for that matter) is based on belief? 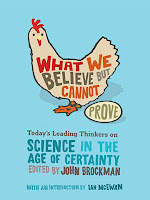 "To believe something while knowing that it cannot be proved (yet) is the essence of physics." - Leon Lederman, Noble Prize winner for physics in 1988 (p25-26 What We Believe but Cannot Prove)

"I believe in science. Unlike mathematical theorems, scientific results can't be proved. They can only be tested again and again until only a fool would refuse to believe them. I cannot prove that electrons exists, but I believe fervently in their existence." - Seth Lloyd, Professor at MIT (p55 What We Believe but Cannot Prove)

"If it's rock solid certainty you want from a proof, there's almost nothing beyond our own existence (whatever that means and whatever we exist as) that we can prove to ourselves, and nothing at all that we can prove to anyone else." - Keith Devlin, professor at Stanford University (p79 What We Believe but Cannot Prove)

"First, and most simply: Everything. In a strict Popperian reading, all things I 'know' are only propositions I have not yet falsified. They are best estimates - hypotheses that so far make sense of all the data I possess." - James J. O'Donnell, Historian at Georgetown University (p195 What We Believe but Cannot Prove)
Email ThisBlogThis!Share to TwitterShare to FacebookShare to Pinterest
Labels: Science, Thinking
Newer Post Older Post Home