Bearing the brunt of the long war 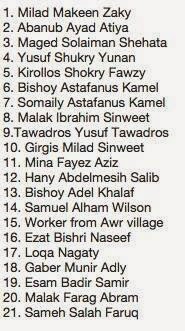 A list of the Christians martyred recently by the Islamic State. At roughly the same time a similar attack to the Charlie Hebo / Paris Jewish attack took place in Denmark. Just as sad and more devastating is the relentless expansion of Boko Haram in West Africa, first in Nigeria and now in neighbouring Niger. We're in the midst of a long war with militant Islam and Christians living in majority Muslim countries are bearing the brunt of it. Thank God for Barnabas Fund, may God's Kingdom continue to grow despite the suffering of our brothers and sisters and may God protect the vulnerable, maranatha.