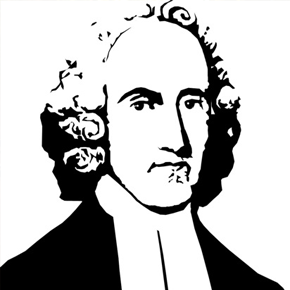 For my study leave I recently attended a conference [technically a congress] about Jonathan Edwards at Ridley College. Overall I was struck by the usefulness of thinking through various contemporary debates through the prism of Edwards' expansive remarks. (A good summary of Edwards via Rhys Bezzant. "The last puritan and the first evangelical.") A few reflections on some of the keynote speakers and papers presented and a couple of the conversations over lunch.


'Edwards and the freedom of the will' by Chris Stead
How do we square Edwards' traditional understanding of providence with secondary causation without making God the author of evil? The Enlightenment was in full swing at the time of Edwards with it's growing focus on the independence of nature. Edwards was reacting (rightly) against the independent determination of 'natural philosophy.' He saw providence not as fatalism but as the personal decrees of God worked out in the world. He does this because he sees the glory of God everywhere. Stead suggests that because Edwards was a man of his time reacting to problems of his time  And so Edwards doesn't adequately explain the relationship between providence and secondary causes, particularly in the light of the complex interrelated nature of causation in the world.

'Being seen and being known' by Kyle Strobel
Strobel outlined Edwards' theological anthropology. Basically it's that people exist because God sees them, "God's perception upholds and defines reality." Edwards describes us in this way because of the "beatific vision", the internal delight, beauty and glory of God that then overflows into creation, redemption and restoration. Becoming a Christian is about seeing the Son, which is an echo of the way the Father gazing on the Son.


For God, who said, "Let light shine out of darkness," made his light shine in our hearts to give us the light of the knowledge of God's glory displayed in the face of Christ. (2 Corinthians 4:6)

Salvation is essentially then partaking in the life of God. We were created with the Holy Spirit, but then are barren after the Fall and the Spirit is restored in our salvation. Then there was a fascinating aside about humans as being more substantial than the reality around them. Also during question time Strobel commented that the doctrine of Justification is about Christ first and foremost and is applied to us because of our connection to Jesus.

'Christology in Conflict' by Corne Blaauw
This was a fascinating paper presented by a doctoral student looking at Edwards' Christology. Blaauw argues Edwards arrives at the right view with some peculiar reasoning and also observes that there's no scholarly consensus on Edwards' Christology. Blaauw's solution is to outline a more comprehensive Christology based on a wide variety of Edward's sermons and notes. I was struck by Edwards' description of Jesus' human nature "accommodating", in it's disposition, the glory of God. "Jesus Christ is the Shining forth of the Father's Glory"

'Jonathan Edwards: Christian Zionist' by Gerald McDermott
McDermott's thesis was the Edwards' theology sometimes sounds like supersessionism (the Church replaces Israel) but that he brings in a strong Christian Zionism through an eschatological back door. McDermott started by showing how Edwards arrived at his Christian Zionism with a brief theological and historical tour that started in the New Testament.  For example he noted the early church's participation in temple life and the Zionistic emphasis of the New Jerusalem, gates named after the twelves tribes. Although the early church fathers (Justin Martyr and Tertullian) were hostile to Judaism, they also surprisingly affirmed the restoration of the people of Israel to the land of Israel. Full blown replacement theology arrives with Origen. McDermott then traces some interesting themes of Christian Zionism from the notes of the Geneva Bible into Puritan theology (e.g. Brightman) and then into New England. Jonathan Edwards, reacting to the rising force of Deism and it's attendant anti-Semitism, argued for a strong degree of continuity between the Old and New Covenants. (We are saved by the trusting in the mercy of God in both.) Edwards, a Post-millennialist, thought that Calvin had adopted too much of Augustine's A-millennialism which over spiritualised things and didn't give enough attention to the bodily nature of redemption. McDermott closed by observing that Christian Zionism has an ancient pedigree and shouldn't be tied to the modern manifestation of dispensationalism. For Edwards he saw God's hand at work in history, and the Jewish people returning to their land as part of the glory of God being expressed in the world.

'Jonathan Edwards and the nature of imputation in Original Sin' by Heber Carlos de Campos
De Campos argued that Edwards' view of Original Sin is a Reformed expression of that doctrine. Campos' presentation was notable for his clear outline of how Original Sin is transmitted from Adam to us. Oliver Crisp argues that 'Edwards fused realism and representation.' Realism is an obscure way to say we're sinful therefore we have Original Sin, without clearly explaining how it makes that jump between Adam and us. So how is guilt transmitted? Generally there are two competing answers, guilt comes through personal corruption or guilt comes through representation. To help us navigate an answer through Edwards and more generally de Campos outlined six characteristics of the doctrine.
There is an important but neglected parallel with justification. We might argue that's it's unfair for God to credit Adam's guilt to us, but our righteous standing before God because of our faith in Jesus is also unfair. De Campos noted that modern interpreters sometimes struggle with the idea Adam being a representative because of our post Enlightenment emphasis on individual agency and responsibility.

'Hero or Herald? Agency and Authority in The Life of Brainerd by Edwards.' Rhys Bezzant
As part of a larger project about how the famous people of Christian history mentored others, Rhys analysed the topic of evangelical leadership, through the lens of Edwards's biography of Brainerd. Brainerd was a missionary in the mid 1700's to the American Indians. Brainerd was relatively successful despite poor health and a lack of formal qualifications. Since then he's been held up as a heroic leader, boldly evangelising the Indians. Rhys opened by quoting Vishal Mangalwadi's observation that Christian leadership subverts the cultural norm of heroic superman with the model of  suffering servant.  However Edwards' biography of Brainerd is almost a hagiography which plays well in the modern evangelical climate of promoting entrepreneurial "big L leaders." Rhys then made the case that if you look closely you see in Brainerd a man who struggled and also willingly operated within a larger ecclesiology and framed his work eschatologically and not as "a big L leader." "We need heralds who are privately godly and not public heroes" in ministry argued Rhys.

Economics with Andrew Schuman
Over one lunch I asked someone doing a combined Theology-MBA degree at Yale for a Christian approach to economics. He suggested this:

Theodicy with Tim and Mark
Over another lunch I asked two pastors, Tim from Victoria and Mark from Perth (I didn't catch their their last names) about theodicy. This came out of one of the themes of the conference, did Edwards' emphasis on God's glory in creation and redemption make him the author of evil and what's a practical pastoral response? Together they suggested this mini framework.