"Daughter, your faith has healed you..." 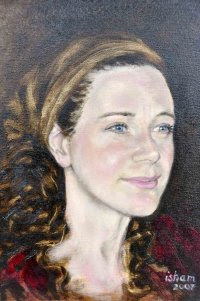 This is an oil painting of my wife, Amy. She has many terrific qualities but suffers from a chronic and incurable disease. It's chronic, but low intensity, it hurts but it's not acute all the time. It started about three years ago, coincidentally the length of my Master of Divinity at Ridley College. Although we've been blessed remarkably by the medical system at Mercy Hospital for Women, its been a constant difficult theme in our lives for the last three years. For the last two and a half years we bounced around between specialists until recently when Amy had some exploratory surgery at Mercy Hospital and received a diagnosis. The symptoms are annoying and sometimes debilitating but manageable and this experience has given Amy insight into other people's suffering and its also taught us to be thankful to God for things we may not have otherwise noticed.

I wanted to post about this because I wanted to process publicly some of the theological issues associated with Amy's long running physical illness. (Amy and I aren't bothered by where the brokenness of our bodies comes from, we instead want to think about how to go on.) Many of the Biblical stories of physical illness end in healing: Naaman, the gentile Army general who suffers from leprosy is eventually healed by Elisha (2 Kings 5). In biblical times the word “leprosy” probably included a broad sweep of aliments. Jesus heals a number of people suffering from leprosy (Matthew 8:3, Mark 1:42 & Luke 5:12). Then there are several general references to Jesus healing “the sick”. (E.g. Matthew 4:24, Mark 6:13, Luke 4:40 & John 6:2) But probably one of the most striking healing stories, is the one of the woman who touches Jesus when he walks through the crowd (Mark 5:25-34). Amy and I pray often for her healing, maybe the Lord will grant a miracle and if Amy is healed we need to be immediately thankful and be confident in identifying it as a miracle!

However Amy may not be healed, how do we go on? On the other side of eternity God promises real physical healing: “on either side of the river, the tree of life with its twelve kinds of fruit, yielding its fruit each month. The leaves of the tree were for the healing of the nations.” (Rev 22:2) Jesus, the first of us all to be resurrected, shows his disciples the healed scars on his body and eats food with them. (John 20-21) So we have a promise, and so we know that this pain is only for a time. Paul had an unspecified thorn in the flesh, which he asked to be taken away but it wasn't (2 Cor 12:7-10). So Paul writes this: “But [the Lord] said to me, My grace is sufficient for you, for my power is made perfect in weakness. Therefore I will boast all the more gladly of my weaknesses, so that the power of Christ may rest upon me. For the sake of Christ, then, I am content with weaknesses, insults, hardships, persecutions, and calamities. For when I am weak, then I am strong.” Whatever it was, it wasn't bad enough to totally incapacitate Paul, so in some senses it sounds like Amy's pain, in the background, hurting. But then God's grace is highlighted in the midst of Amy's weakness, it's hard, but for the sake of Christ, we honour God as we go on serving Him.
Email ThisBlogThis!Share to TwitterShare to FacebookShare to Pinterest
Labels: Personal, Reflection
Newer Post Older Post Home