Socratic Logic: how do we describe something? 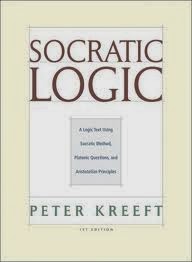 What is a thing, how do we describe it? Peter Kreeft explains how in Socratic Logic arguing that it's a two step process; firstly we categorise something, in other-words we make clear what we're pointing at and then we provide an essential definition, the true distinguishing feature of whatever it is.

Categorizing something (being clear about what we are identifying) using Aristotle's ten categories (p55):

After establishing clearly the thing being 'pointed at', we then define what it essentially is (p124) observing the following rule:

"A definition must be:
1. Coextensive [neither too broad not too narrow]
2. Clear, literal and brief
3. Not negative or circular"

Kreeft lays the usual ways things are described based on Aristotle's four causes (p128-129):
Defining something, anything is a tricky business even for a philosopher like Kreeft. Often we rely on contextually understood rules of thumb. Sometimes though we need to get to the bottom of something and thinking logically and socratically is important.
Email ThisBlogThis!Share to TwitterShare to FacebookShare to Pinterest
Labels: Philosophy, Thinking
Newer Post Older Post Home