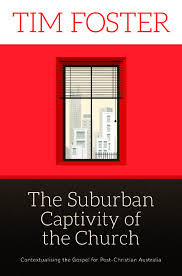 There's a teacup sized storm surrounding Mark Earngey's review of Tim Foster's Suburban Captivity. A few remarks about the mini-controversy itself before focusing on two themes in particular, the Atonement and the Resurrection in Tim's book. There are a number of reviews, including a mildly critical Gospel Coalition one by Craig Tucker. The indefatigable Gordon Cheng, then posted Mark Earngey's review on his Facebook wall causing mini-ruckus about both Mark's very critical review and whether or not a critical review should be shared on Facebook. Tim then wrote this post on the Ridley page in response, emphasising that Mark's review misrepresented him.

Surely, public discussion (books, articles and social media) involves disagreement and the voicing of strong opinions. A tangent for a moment about disagreement amoung Australian Evangelicals. There was some more bad weather in a teacup when Michael Frost (a Baptist professor at Morling) attacked Murray Campbell (a baptist minister at Mentone Baptist) for being pleased about the unity expressed at the launch of Gospel Coalition Australia, "the end of tribalism". That thread quickly degenerated the way most online stuff does, into an ironic and bitter display of disunity. (I also felt as though Michael was stirring up the mob and should've reigned the commenters in.)  However I do wonder if as Evangelicals we're too quick to get bent out of shape when it comes to public disagreement about theology, is Murray's "end of tribalism" an unnecessary veneer that retards necessary public discussion of things that matter?

Anyway back to Suburban Captivity by Tim Foster. Tim's main focus is the middle-class, suburban "captivity" of Australian Evangelicalism. Tim wonders if the gospel message of Australian Evangelicalism has been contaminated by suburban values. Anecdotally, this seems like a true observation, for example it's not hard to find evangelical churches in the eastern suburbs of Melbourne and Sydney. But I wonder what a detailed study of modern Australian Christianity, in rural and urban contexts and across all classes would reveal? The sociological context of the gospel, especially when it comes to the powerful forces of class is often overlooked and I appreciated Tim opening this particular can of worms. I also liked the connection Tim observes between Kingdom and culture. The Kingdom of God is made of people who do 'cultural' things; make breakfast, ride to work, sing and dig ditches. I also like the way Tim described how people are part of larger narratives.

Although I'm agnostic about the suburbs, they like slums and lonely country hamlets have their downsides. But are they the evil incubator of middle class values that Tim is critiquing? They certainly are connected to particular assumptions surrounding prestige and pleasure.  Characteristics that are features of liberal western democracy, additionally the suburbs are often built with the worship of progress and prosperity as defining values. But we don't want to romanticize the wealthy, working or welfare classes either. As if their pristine un-evangelised jungles offer to flush out our middle class evangelical palates, tainted by years in the leafy suburbs. In sum Tim wants us to think about the larger narrative of the people we are ministering to and ask how the gospel connects to them in their particular context.

But I want to circle back to Tim's presentation of the gospel and his presentation of the Atonement and the Resurrection in chapter 1 of Suburban Captivity. Tim's gospel presentation focuses on the 'battlefield' (my term not his) atonement metaphor, he outlines three of its four main elements; the arrival of the serpent (Gen 3:1), the way in which Jesus binds the strongman (Mt 12:22-27) and how Jesus' death at the hand of his enemies actually brings peace and victory. However Tim oddly overlooks Jesus' observation in John 8:44 about how we have become the enemies of God by swapping the leadership of Adam for the leadership of Satan. "Sons of Satan" Jesus calls us. It's not a cosmic battle that involves us, we have created a cosmic battle through our rebellion! I'm not sure why Tim leaves this aspect of the battlefield metaphor out, it could an oversight but the 'Battlefield metaphor' is central to his gospel presentation.

Personally I find the idea of rival atonement theories unhelpful and misleading. The five atonement metaphors are complementary although some get more Scriptural airtime than others. So I'm sympathetic to Tim's thesis that the 'Battlefield metaphor' needs more attention. However I wonder why he pitches it against the "punitive", by which he means 'city-gate or legal metaphor' of the atonement ("punitive" is Tim's term, 'City-gate' is mine). This is where some of the heat surrounding Mark's review is. Tim writes:


"Jesus has assumed our punishment and free from the blight of sin, our relationship with God is restored. While there is a punitive aspect to this, the threat of God's wrath is not the problem that shapes the message, nor is it the only way in which the Bible understands Jesus' death."

Tim does not offer a clear rationale why the battlefield metaphor "better represents the Biblical narrative." Tim then goes on to pitch a gospel shaped around what some might call an 'over-realized eschatology' of the Kingdom: "there will be a new social and political order according to God's purposes." I'm not ofay with debates surrounding the nature of the atonement, so it would've been good to have some pointers from Tim describing if this "puntive-telic" tension of his is actually a scholarly 'thing' or just a rhetorical device for moving his particular presentation forward.

The problem with an over-realised eschatology, where "the new order is breaking into the present", is that our attention is taken off life after eternity. "The present implications of the gospel" are uneven, for some Christians the full-orbed benefits of Kingdom life are found here and now, for others, they have to live a scrappy and desperate existence. Surely the delight of the resurrection will be in, well the resurrection! While Tim's observation that the gospel is embedded in a larger culture narrative is true and worth consideration, but it's weakened by his favoring of a truncated version of the battlefield metaphor and weakened by focusing on the present as opposed to eternity. We live, says CS Lewis, in the shadowlands, these Narnian adventures set great things in motion, but the grand narrative opens after resurrection, salvation is a ticket into that larger story.
Email ThisBlogThis!Share to TwitterShare to FacebookShare to Pinterest
Labels: Atonement, Resurrection, Tim Foster
Newer Post Older Post Home